Moshe Feldenkrais (Doctor of Science, Sorbonne) was an engineer, physicist, inventor, martial artist and student of human development. Born in north-eastern Europe, as a young man he journeyed on foot for a new life further south. In his early thirties he studied at the Sorbonne, Paris, and worked in the famous Joliot Curie laboratory. 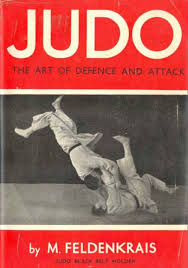 His interest in Ju Jitsu brought him into contact with Professor Kano from Japan who developed the sport of Judo. Dr. Feldenkrais was a founder of the Ju Jitsu Club of Paris and was one of the first Europeans to earn a black belt in the sport.

During WW2 he went to Britain to work on anti -submarine research and it was there that he began to develop his Method and wrote the first of several books on the subject.

A knee injury and uncertain prospects for surgery began Feldenkrais on what was to become a life long exploration of the relationship between movement and consciousness. He taught internationally until he died in 1984.

In developing his work Moshe Feldenkrais studied in depth diverse fields including anatomy, physiology, child development, movement science, evolution, psychology, sports and a number of awareness practices and somatic approaches. Dr. Feldenkrais authored a number of seminal books on movement, learning, human consciousness and somatic experience. He taught in many countries throughout Europe through the 1960s and 1970s and in North America through the 1970s and 1980s. He trained his first group of teachers in the early 1970s, followed by two groups in the USA - one group in San Francisco and another in Amherst NY.